Right now, there is no organized surveillance system for COVID-19, and the “confirmed cases” that have been revealed by tests are not indicative of the true number in the population.  And because testing is ramping up in the US, there is no way to use that test data to reliably assess the rate of exponential rise in cases. But perhaps the US influenza surveillance system can help shed some light on COVID-19…

For many years the CDC has made weekly influenza surveillance reports available off of its website: https://gis.cdc.gov/grasp/fluview/fluportaldashboard.html: 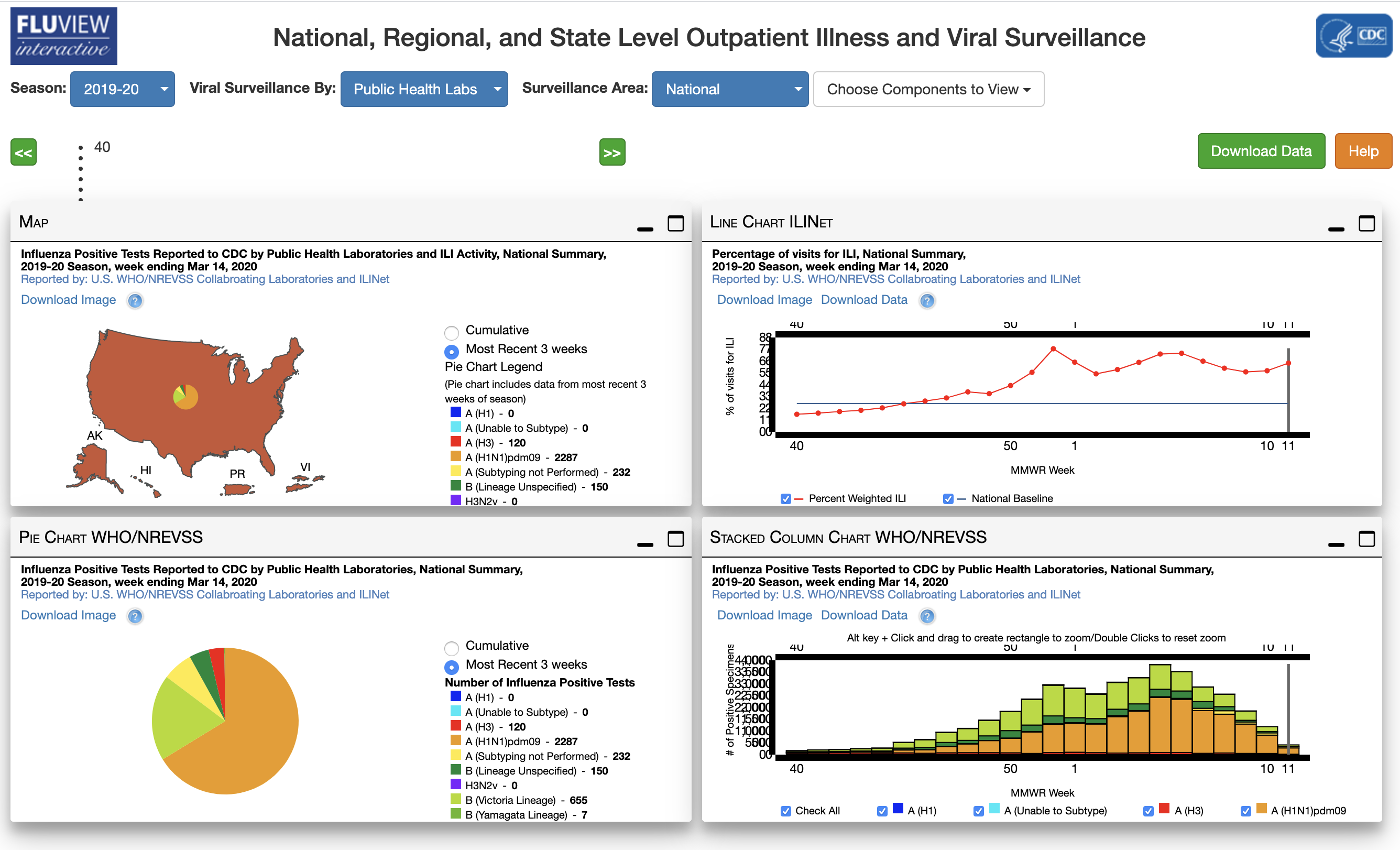 The upper right hand plot shows the number of people with “influenza like illness” (aka: ILI) visiting sentinel providers in the US each week.  A case definition of fever 100°F or greater, oral or equivalent, and cough and/or sore throat is used by CDC in its U.S. Outpatient Influenza-like Illness Surveillance Network (ILINet), in which healthcare providers report the total number of patient visits and the number of patients seen for ILI each week. Unfortunately for influenza ILI surveillance, many of the hallmark symptoms of COVID-19 (particularly milder cases of COVID-19, which is 80% of cases) are virtually identical to those of influenza.

During a normal influenza season, the number of visits for ILI to sentinel providers can be used as a warning system that flu might be on the uptick in certain areas.   However, when a new virus that mimics flu symptoms is circulating, this can muddle the surveillance for flu. Especially ILI surveillance, because if people are afraid of that new illness, suddenly they may flood the health care system by going to the doctor for relatively mild cases of ILI that otherwise they would have just treated themselves at home with bed rest, and now those cases are being counted when before they would not have.

The data in the above plots go to March 14th, 2020 (the most recent data at the time of this writing).  Note that there has been a recent uptick in ILI cases.  However, we have no good way of knowing if that uptick is due to people with mild ILI symptoms flooding the health care system in a panic because they’re afraid of COVID-19, or if it is really people who are seriously ill with severe ILI-symptoms (due to either COVID-19 or flu).

But perhaps the influenza testing data can help shed some light on what’s going on.  In an influenza surveillance system, the sentinel providers will test, say, the first three people coming to their office on a Wednesday for influenza.  This may not be exactly how the surveillance system is set up in the various US states, but is in fact very similar to how the New Zealand surveillance system was (or is) set up.  The testing is done in exactly this way so the maximum number of surveillance tests per week per sentinel provider is at most three (in this example).  It may be less than that if less than three people show up on a Wednesday complaining of flu-like symptoms, but (in this scheme) per provider is never more than that.  When done this way, the number of tests is not affected much by panic-related health seeking behaviours like ILI counts are.  But even if the sentinel providers test everyone who has ILI, that doesn’t affect the fraction of those people who will test positive. 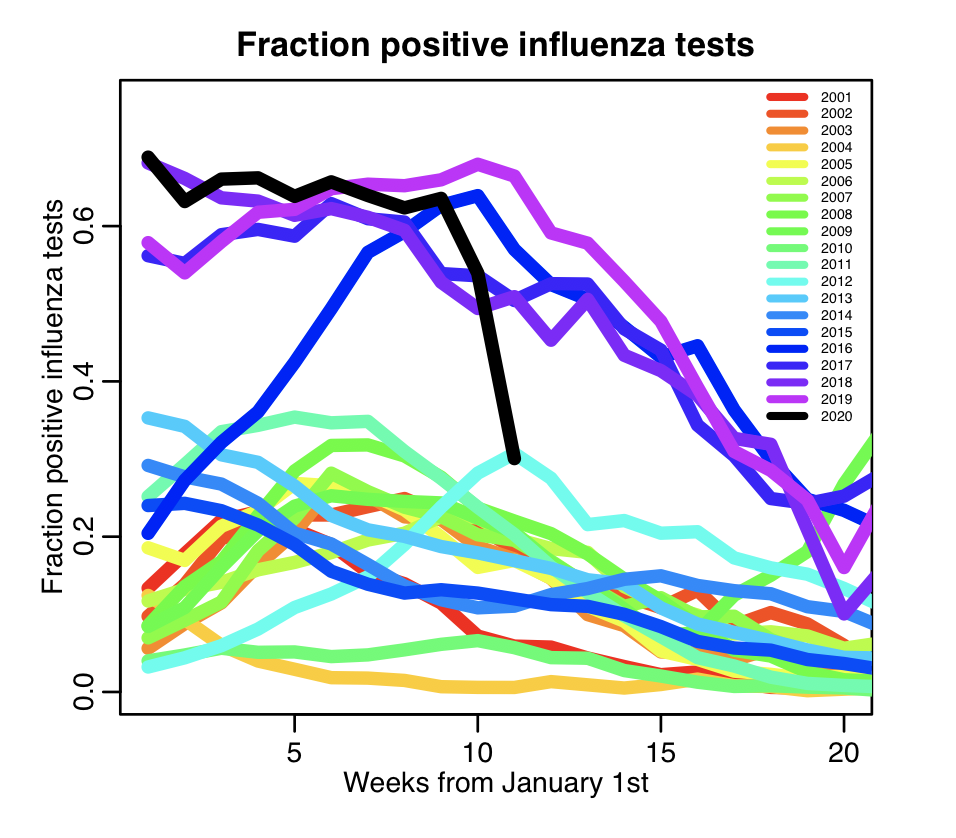 You can see that the fraction of influenza tests testing positive for flu has dropped dramatically the past couple of weeks, in a way that it has never done this time of year in the past 20 years.  It is clear that some influenza-like illness is significantly circulating right now that is not in fact influenza.

Notice that up until a few weeks ago, the influenza season of 2017-2018 was most similar to the current influenza season, and now the 2019-2020 fraction of positive tests has dropped significantly below that season.  While not perfect, as the weeks progress, the ratio of the trend lines of those two seasons may be useful for approximately assessing the rate of exponential rise in cases in the US.