In this post I examine how COVID-19 may change the age and gender demographics of the electoral landscape in a way that does not favour Trump’s performance in the 2020 election (all other things being equal to 2016).

As the COVID-19 pandemic sweeps across the globe, stark age and gender disparities in case mortality rates are being observed.  Older people are far more likely to die from the virus, and men are around twice as likely to die compared to women in all age groups.  In addition, co-morbidities (such as diabetes or heart disease) have been found to significantly increase risk of mortality due to COVID-19.  Educational attainment (or lack thereof) has been found to be significantly associated with chronic disease and comorbidities.

During a press briefing on March 23, 2020, Trump announced that due to his concerns about the effect of social distancing measures on the economy, he intended soon to return the US to “business as usual”.  In an interview on March 24th, he stated he wanted the US economy fully up and running by April 12th (with loosening of social distancing measures occurring much sooner). However, the temporal distribution of COVID-19 mortality in the US shows the  country currently is still in the early stages of the pandemic, and at least several weeks (if not months) from the peak.  Encouraging lack of social distancing in an attempt to encourage economic growth will almost certainly have dire implications for the ability of the US health system to keep up with COVID-19 cases, and death rates will likely exceed 2% in the United States.

Given that Trump appears to be choosing economic health over public health, here I’ll take a look at what COVID-19 mortality might mean for shifts in the electoral landscape, assuming all other things are equal to the 2016 election (ie; that those people who are still alive in their age bracket will vote exactly as they did in 2016).

Spain has made detailed case and mortality data available for their pandemic so far: the COVID-19 case mortality probability in the above voter age groups is approximately 0.2%, 0.2%, 2%, and 10% respectively, and the case distribution is approximately 7%, 20%, 32% and 41%, respectively.  You can see that the cases are heavily concentrated in the age groups most likely to vote in the US, as is the mortality.

What does this mean for changes in the electorate?  On the face of it, perhaps not as much as you might think. Say, for example, a disease completely wiped out everyone age 65 and over, but spared everyone else.  If everyone still alive after that pandemic voted in 2020 exactly as they did in 2016, Trump would still get 45.1% of the popular vote (down 1% from the 2016 value, which is enough to lose the election).   How about if a disease wiped out everyone age 45 and up? In that case, all things being equal, Trump would have only 38.8% of the popular vote and would certainly lose the election.

But COVID-19 doesn’t have death rates as high as I just described in any of those scenarios.  Under the assumption that 50% of the US population ultimately gets infected with COVID-19 (which is actually a lowball estimate) and 2% die, I calculated the expected reduction in Trump voters relative to non-Trump voters;  just based on age alone, the percentage of Trump and non-Trump voters left alive at the end of the pandemic are virtually the same; 97.9% to 98.4%, respectively.  So, just based on age alone, Trump will have a 0.1% disadvantage next election.  Only a small difference, but given he only had a minority of votes last election, it may be enough to cost him the election.

However, there is also the problem of health disparities due to gender-related COVID-19 death risk and lack of health resources and high prevalence of comorbidities in Republican counties that needs to be taken into account. The majority of Trump voters are male (54%, compared to 43% in non-Trump voters) and COVID-19 death rates are twice as high in males in all age groups.  If we assume 30% higher death rates in Trump voters relative to non-Trump voters due to the confluence of all these various factors, Trump will have a 0.4% disadvantage in the next election (all other things being equal).  That factor of 30% higher death rates may be a lowball estimate.  To see why, here is a plot of county-level all cause mortality rates (minus suicide mortality) versus the percent who voted Republican in that county in 2016: 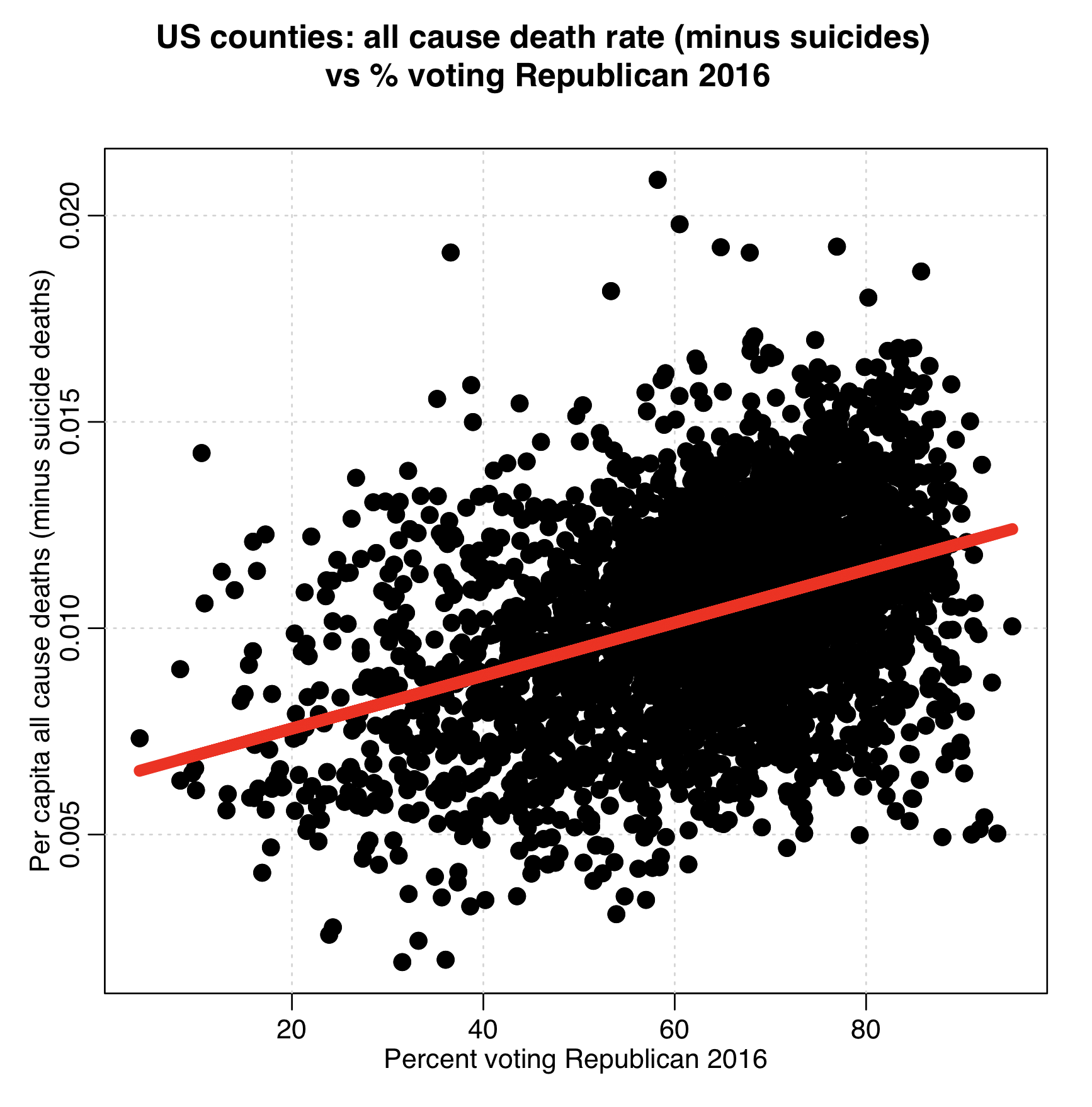 And here is a plot of the per capita number of healthcare professionals versus the % voting Republican in 2016.  Republican leaning counties are much more likely to have fewer health professionals, and have their healthcare system overwhelmed during the pandemic (leading to even higher death rates than what I assumed here because when healthcare systems are overwhelmed, doctors are forced to pick and choose who gets to live and who must die): 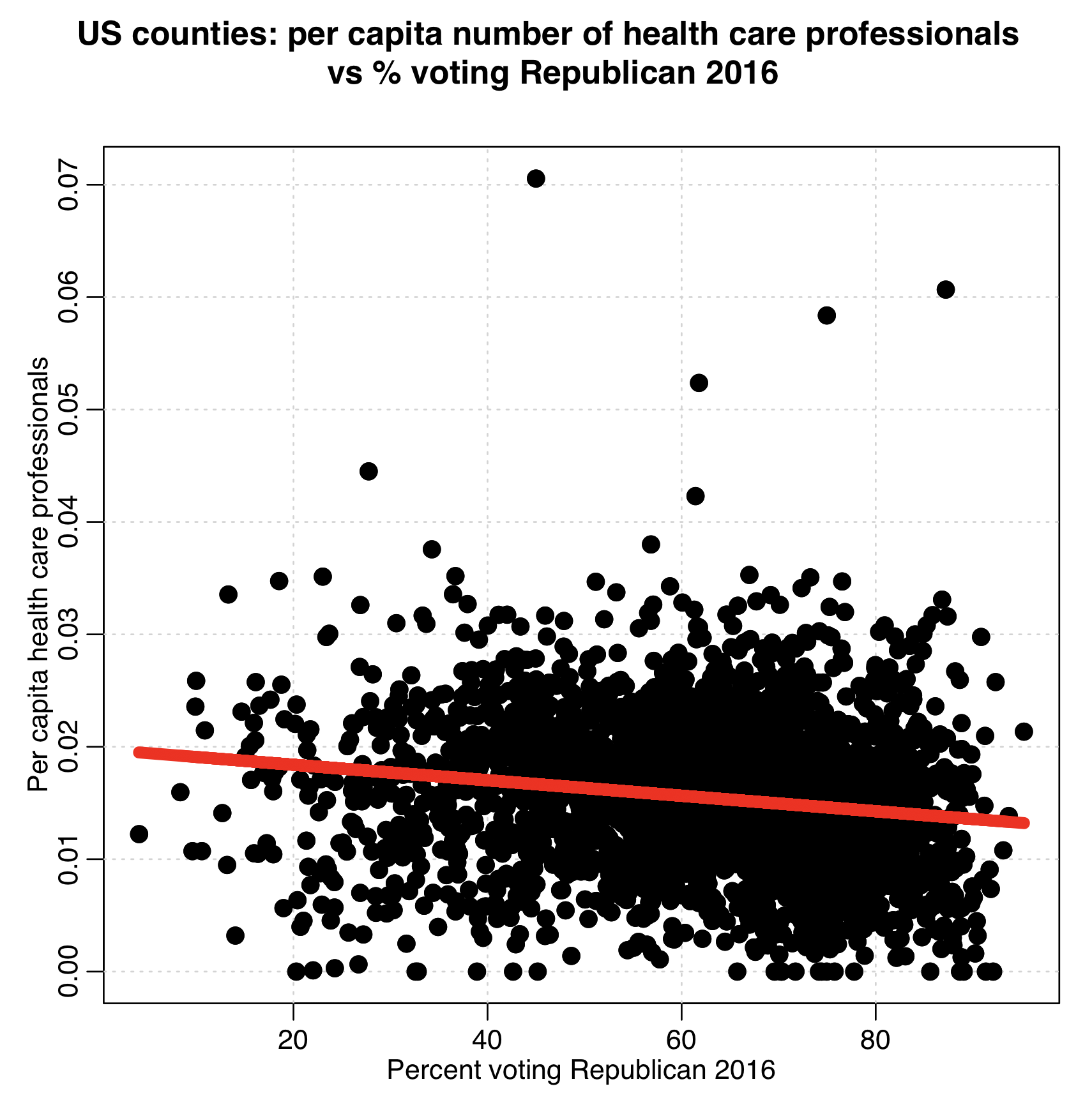 Trump’s decision to return America to “business as usual” early in the pandemic may cost him the 2020 election just based on demographic shifts in the electorate, because it is disproportionately his own voters he is throwing under the bus.