[This presentation discusses methods commonly used to optimize the parameters of a mathematical model for population or disease dynamics to pertinent data.  Parameter optimization of such models is complicated by the fact that usually they have no analytic solution, but instead must be solved numerically. Choice of an appropriate “goodness of fit” statistic will be discussed, as will the benefits and drawbacks of various fitting methods such as gradient descent, Markov Chain Monte Carlo, and Latin Hypercube and random sampling.  An example of the application of the some of the methods using simulated data from a simple model for the incidence of a disease in a human population will be presented]

Many of the parameters for models of the spread of disease or biological population dynamics are usually well known from prior observational studies.  For diseases like dengue and malaria, for instance, the vector population dynamics have been extensively studied in the laboratory and in the field. For diseases like measles and human seasonal  influenza, the latent and infectious period are fairly well known from observational studies.  However, for influenza, it is apparent that seasonal forcing plays a role in either the transmission and/or susceptibility, but it is currently unknown how much of this is due to climate and how much is due to seasonal patterns in human contact rates.  A model for the spread of influenza could include parameters that account for both of these effects, and these parameters can be estimated by fitting the model to seasonal influenza data.

Often times there are model parameters which must be estimated because prior knowledge is sketchy or non-existent.  An example of such a parameter is the vector/host biting rate in models for diseases like dengue, malaria, or leishmaniasis.  In addition, for newly emerged disease outbreaks (for instance Ebola), the reproduction number is not well known.

In order to accurately forecast the progression of an epidemic and/or examine the efficacy of control strategies to improve the current situation, it is necessary to have a model with parameters that have been optimized to describe current data. But in the mathematical life sciences, a hugely complicating factor in estimating model parameters is that the mathematical model itself often has no analytic solution, but rather must be solved numerically.  In addition, another problem is that our mathematical models typically are only an approximation to the actual dynamics.  This means that common regression methods coded up in platforms like Matlab or R simply will not work for these applications due to these computational complexities and model pathologies.  In this presentation, I’ll thus discuss the applicability of various methods for model parameter estimation in mathematical life sciences.

Some simulated data for a hypothetical epidemic in humans

For this presentation, we’ll use as example “data” a simulated pandemic flu like illness in spreading in a population, with true model:

The R script sir_harm_sde.R uses the above model with parameters 1/gamma=3 days, beta_0=0.5, epsilon=0.3, and phi=0.  One infected person is assumed to be introduced to an entirely susceptible population of 10 million on day 60, and only 1/5000 cases is assumed to be counted (this is actually the approximate number of flu cases that are typically detected by surveillance networks in the US).  The script uses Stochastic Differential Equations to simulate the outbreak with population stochasticity, then additionally simulates the fact that the surveillance system on average only catches 1/5000 cases. 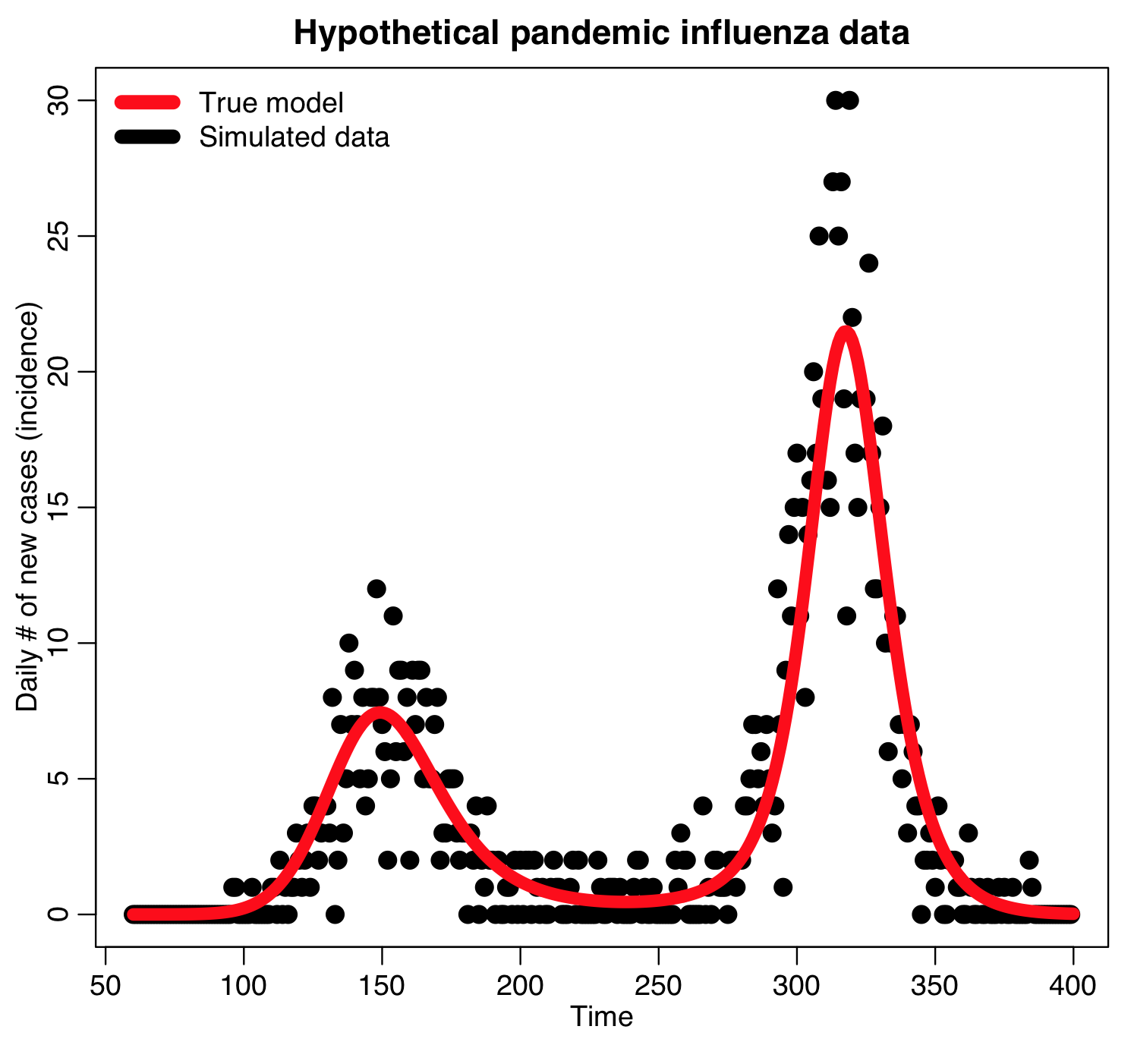 The script outputs the simulated data to the file sir_harmonic_sde_simulated_outbreak.csv

We will be using this simulated data in our fitting examples below.

Things to keep in mind when embarking on model parameter optimization

Successfully obtaining a model that is parameterized to optimally describe vector borne disease data first and foremost requires choosing a model that appropriately describes the dynamics underlying the patterns in the data.  This requires, at the very least, a knowledge of the biology of the vector population, and the epidemiology of the disease (ie; mechanism for spread, whether recovery confers immunity, etc).

We need to obtain the most parsimonious model that incorporates the most relevant dynamics.  If a model has too many parameters, even the most sophisticated of parameter optimization methods will fail!

The next step, after choosing a model, is to choose a “goodness-of-fit” statistic that will give an indication of how well a particular model parameterization is describing the data. This depends on the probability distribution that underlies the randomness in the data (more on that in a moment). Once we have that goodness-of-fit statistic, there are a variety of methods that can be used to find the parameters that optimize that statistic.

Choice of an appropriate “goodness of fit statistic”

Some commonly used goodness-of-fit statistics (this isn’t an exhaustive list):

A (not exhaustive) list of commonly used parameter optimization methods is as follows: